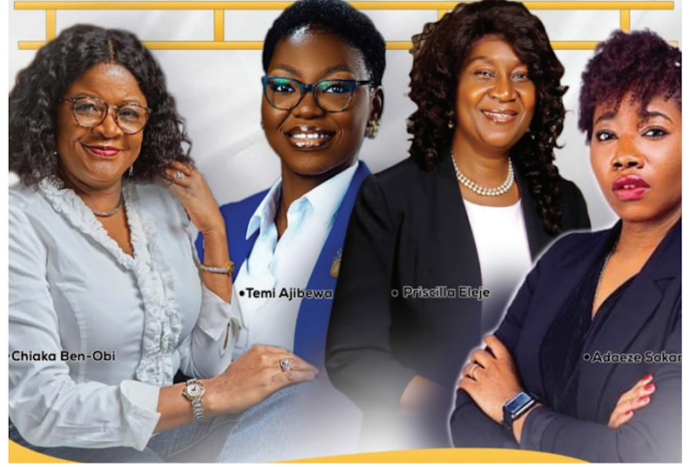 In the spirit of the recently commemorated International Women’s Day, the Information Systems Audit and Control Association, Abuja Chapter saw the need to celebrate some incredible women. Rebecca Ejifoma, who profiled thefirst female Director, Currency Operations of the Nigerian apex Bank, CBN Priscilla Eleje; the Country Director for UK-Nigeria Hub, Adaeze Sokan; Group Lead, Digital and Innovation Support Groups at the Federal Inland Revenue Service, Mrs. Chiaka Ben-Obi; and the CEO, Millionaire House Wives, Temi Ajibewa, writes on the rare resilience and A game these four women in the technology and information industry are applying to remarkably ignite lasting change for other women

Globally, women are recognised as a force of nature and rapid development. And everyday, more women are not only throwing their fears into the wind to break records but are also leading a life worth emulating.

These game changers were panelists at the recently held virtual General Meeting of the Information System and Audit Control Association (ISACA) Abuja Chapter in March, on the theme, “Breaking the Bias: Women, Workplace and the Fourth Industrial Revolution”. With Dooshima Dapo-Oyewole as the anchor, this came to light under the leadership of Mr. Emmanuel Omoke as the President, ISACA Abuja Chapter.

This appointment was said to have attracted accolades home and abroad, especially by several women bodies in Nigeria, most notably the National Council of Women Societies (NCWS) Nigeria. Eleje was inducted into the Nigerian Women Hall of Fame by the National Centre for Women Development on 12 June 2019.

Today, she is best classified as a resilient woman whose unique work style not only inspired participants at the meeting but also served as a wakeup call for the up-and-coming generation of female leaders.

Recounting her career trajectory at the virtual meeting moderated by Dooshima Dapo-Oyewole, Eleje charged women worldwide to see themselves as competent and capable of effectively achieving their full potentials and handling any position including those which were hitherto exclusively handled by men.

She narrated, “I started my career in the bank as a young girl straight from school. I really didn’t have an idea how I would end or what the future held,” adding that she was just like many young people out of school who needed a good job to get their lives off the ground. “But I’ve always believed in working hard, being passionate and committed to your goals irrespective of the challenges.”

The heavyweight achiever further conceded that it pays to put your best foot forward regardless of where you are posted. She revealed that she had worked in offices many people, especially women, ordinarily would not want to work in and challenged people never to see any assignment or posting as punitive.

The Hubert H. Humphrey Fellowship Programme alumna admitted that these exposure enhanced her knowledge and competencies on the job and helped to equip  her for the position of director currency when the post became vacant.

“Never fail to give your best,” she encouraged, “because at the end of it all, it is often to your advantage”. She admonished the women to aspire, be bold, confident and have very good knowledge about their jobs. “They should see themselves as capable of effectively discharging their responsibilities because  self image is also very important”.

When Sokan started off on her career path years ago, little did she know that her determination and sharpened tools would pave the way for her into becoming the Country Director for UK-Nigeria Tech Hub.

This globally acclaimed position undeniably projects her as a perfect reflection of a female champion carving a niche for herself in the technology space.

Although fulfilling, the tech expert expressed, “I didn’t have these as a plan or life goal. I know I wanted to get into a position to make a difference. But, I didn’t know it would be a tech hub or that I would work with the British government”.

However, her resolve to be ahead of the pack gave her an edge in her career path. “I did my best. The sky was the limit. I started out as a volunteer, met my first boss where I was working as a personal assistant and that was where my tools were sharpened.”

According to Sokan, she didn’t rest on her laurels. She groomed her skills on how to be confident when speaking, how to write basic memos, communicate effectively, and engage different stakeholders.

At that point, she mastered the basis for building her career and that “helped me get into tech”. She continued, “So I got a phone call from a renowned tech hub in Nigeria, looking for someone to manage its impact arm. I was called because somebody referred me, saying I’m good at getting things done”.

Sokan gleefully expressed that being teachable goes a long way in fuelling one’s success. “For me, it was being willing to learn and be mentored.” Acknowledging that men mentored and raised her, she said “they taught me how to be confident to help me attain any height. I think that’s how I got to this height. For me, the journey is just starting”.

Another distinguished personality making her name heard is Ben-Obi. She is passionately steering the affairs as the Group Lead, Digital and Innovation Support Group of the Federal Inland Revenue Service (FIRS).

Part of her duty is superintending a couple of departments in FIRS with the responsibility of transforming FIRS to a digitalised organisation, in-line with current trends and taxation of the digital economy.

“I really wanted to be a diplomat as I was growing up,” she reminisced. “Because I loved travelling, but my grandma wouldn’t have any of that. She was more concerned that, “I can’t  be or go into Foreign Service because no one will marry me”.

And fortunately for her, as a newbie out of the university, Ben-Obi knew where to job hunt. “When I graduated from university, I didn’t go looking for jobs in Foreign Affairs like I wanted. I started up with my usual admin jobs, got married and moved to the UK for my Post Graduate degrees.”

The FIRS digital boss joined the UK labour market in 1996/1997, during the millennium bug or Y2K panic. She found lots of opportunities in ICT. “Gradually, I was taking programming courses during my MBA. My getting into ICT was an accident of need. I needed a job and that was fast moving.

“On completion of my MBA, I started a Masters Programme in Information System Development. Since then, I have been in Tech in many capacities in the private sector, cutting across industries, before joining the public sector.

While highlighting that as her children were becoming teenagers, she needed to stay home more. Thus, she felt having a job in the public sector would give her the time she wanted to spend with the children at home. “I guess I was mistaken because FIRS then was going through modernisation.

“I was the Director, Modernisation Department, with the overall responsibility of delivering the modernisation agenda projects, aimed at transforming FIRS into a modern, efficient and effective tax administration agency. There were a lot of projects that kept me late in the office and most of them were automation and that’s where I have been in FIRS.”

Ben-Obi also agrees that most businesses are going digital, hence the need for FIRS to employ the same strategy. “If we are the Tax Authority with the responsibility to assess, collect and account for taxes from these business entities for the Federal Government of Nigeria, then we have to understand and key into what is happening in the digital economy.”

Ajibewa, on the other-hand, is changing the narrative for house wives and women whose situations have forced them to bring home the bacon. The award-winning business coach, bestselling author, and founder of Ignites Africa among others recalls how she arrived at empowering such women.

“Self-actualisation and self-mastering are important. If you have a full idea of who you are, you’ll hardly allow anybody to mess up with you,” says Ajibewa.

While she contributes to activate positive change, moves communities forward and inspires unthinkable actions, the House Wives CEO challenged women. “I have about five mentors – all men,” she chuckled. “I recently had a female mentor. I don’t see it like men dominate a space. I see everything as equal.

“That doesn’t mean I can’t empathise with other women who are supposedly forced to become home makers because they have to take care of the kids and become housewives. My work entails training and empowering them to start online businesses.”

Indeed, being confident, teachable, persistent, optimistic, passionate and purposeful are some of the attributes these  leaders recommended to help other young women challenge the status quo.