Microsoft releases a new update to the Dev Channel insiders. As the latest Windows 11 Insider Preview Build 25115 is now rolling out to Dev Channel only, this closes the window for you to be able to switch from the Dev Channel to the Beta Channel. This build will not be offered to ARM64 PCs, says Microsoft.

The latest build comes with a new feature for making everyday tasks quicker in Windows 11 through inline suggested actions. Apart from this new feature, the Windows 11 build 25115 also includes a good set of general improvements and fixes. 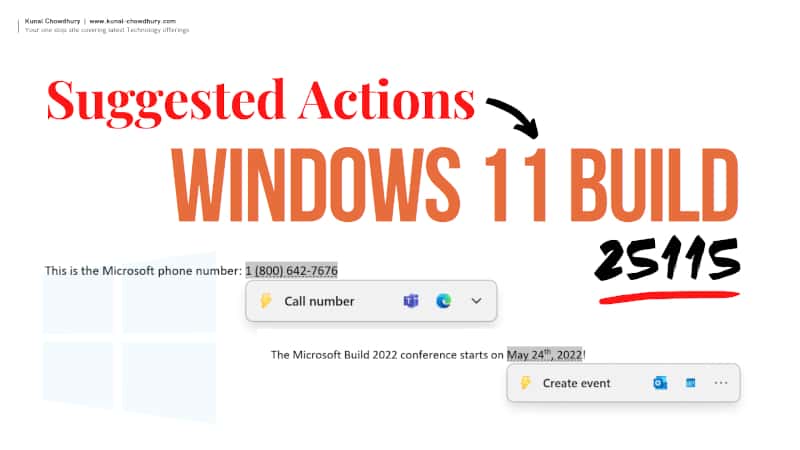 The Windows Insiders in the Dev Channel can now try out a new feature in this Windows 11 build 25115 for making their everyday tasks quicker. This can be done through inline suggested actions. When you copy a date, time, or phone number, the Windows OS will suggest actions relevant to you. This includes actions such as creating calendar events or making phone calls with your favorite apps.

Updated the underlying speech platform to improve voice activity detection for voice access, live captions, and voice typing, as well as address some issues with how punctuation is recognized.

Fixed an issue related to loading the system tray icons in Settings > Personalization > Taskbar which could cause Settings to crash when opening that page recently. This issue may have also led to some explorer.exe crashes for impacted Insiders.

We made another change to help improve the performance of loading Home.

Fixed an issue where if you had ever opened the context menu, doing CTRL + ALT + DEL and cancelling would lead to explorer.exe crashing.

Fixed an issue where if Settings suspended, it could lock up explorer.exe in certain cases.

Fixed some issues related to access key use in Task Manager, including that you weren’t able to directly press ALT + + without first releasing the ALT key, and that displaying the access keys wouldn’t work after having used and dismissed them.

If the CPU reaches 100%, the CPU column header should no longer unexpectedly become unreadable in dark mode.

Addressed an issue which was leading to Memory Integrity unexpectedly getting turned off in some cases after rebooting.